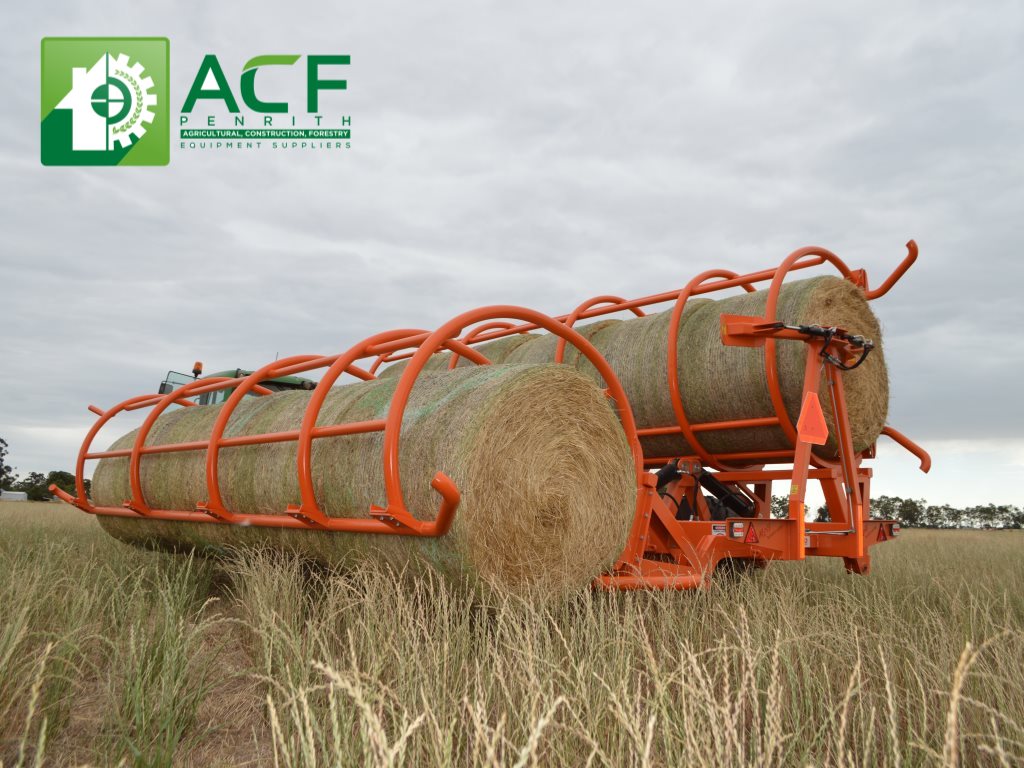 Panther, has just introduced a new round bale handler, the R10 Bale Chaser. Manufactured in Finland the R10 is imported & distributed Australia wide by Agricultural supplier, ACF Equipment Suppliers Penrith and introduces a new process in Australia for collecting and transferring bales.

The R10 Bale Chaser can carry up to ten round bales, accommodating bales between 121 to 146cms approximately in size. Providing versatility in the paddock, the size of the load space is adjustable accordingly to the size of the bale.

Agile in the paddock and simple to drive, the R10 makes collection easy.

Consisting of two hydraulically operated circular frames, the frame extends down to the ground and picks up bales as they lie in the paddock, the frame then retracts with the bale secured in the frame returning to original position on the trailer for transport.

The bales are held into place with stoppers at the front and hydraulically operated pushers on the rear, which tightens up the pack. There is no need to tie down the load, which prevents bale damage.

The R10 Bale Chaser has an adjustable drawbar, hitching easily to a tractor, with a min horsepower requirement. Equipped with terrain adaptability features such as floatation tyres which reduces field compaction, the R10 also is fitted with hydraulic operated brakes, with the optional extra of air brakes. The unit itself is simplistic in relation to componentry and easy to maintain with accessible grease points throughout.

Requiring only one operator in the tractor, the easy bale handling process of the R10 eliminates the need for operators to be in the field surrounded by equipment, or manually tying or untying loads. Bales are secured in the R10 which reduces movement or risk of roll over of bales, the R10 also affords safety and good visibility of the process from the cabin.

Reducing the cycle time, the R10 can transport ten bales at a time achieving transport of bales further and faster than the traditional set up of tractor, bale grab and flatbed trailer. The R10 also reduces compaction in the field, by using less equipment in the paddock, and reduces wear and tear on other equipment.

Offering optimal field coverage the R10 Bale Chaser is ideal for moving round bales from point A to point B faster. Productivity is increased by a speedier process, attributed by the feature of simple and quick unloading of ten bales at once.

View a video of The R10 working https://youtu.be/vWT0qPA5NPo

The Weekly Times also wrote an editorial on the Panther R10: